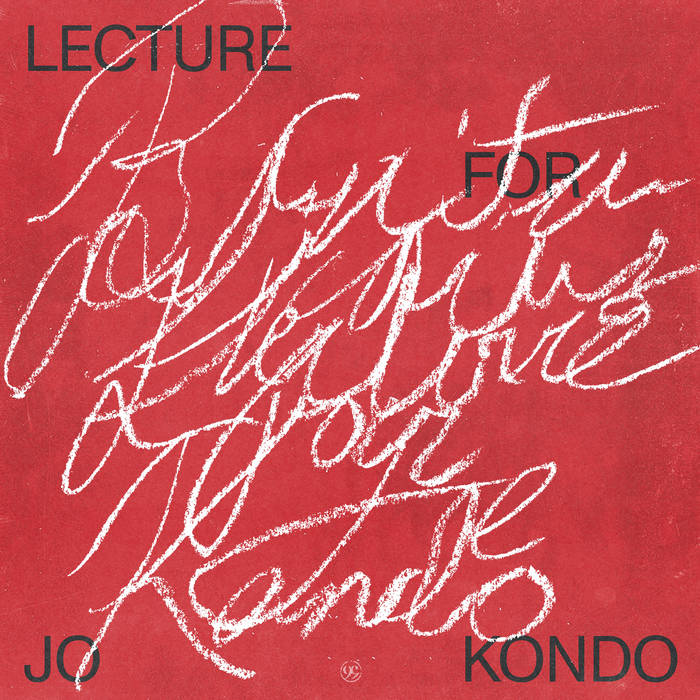 “As I started to search for clues and discovered more about Bunita Marcus’ connection to Morton Feldman, I began to wonder if perhaps she might be the Lee Krasner of music.
Might her relationship to an American icon, like Krasner’s to Jackson Pollock, have also been one that was mutually influential?
Could her seeming marginalization today and lack of recognition as an important creator in her own right have also been a by-product of the gender politics that has played into so much of how cultural canons become codified?” Frank J Oteri, NMBX

On September 25th Bunita Marcus – an unsung heroine of post minimalist music and close associate of Morton Feldman and John Cage – releases her ‘Lecture For Jo Kondo’ EP, on 99Chants.
A promising talent within the 1970s/80s New York avant garde music scene, at the time (and also at intervals since) Marcus made formidable achievements, but her full potential was side-lined in a patriarchal environment, where male musicians were allowed to easily dominate, largely unchecked.
Her important part in the cannon of contemporary music has been almost entirely overlooked in music/arts media, and omitted from the dominant narrative on key figures, which is something the 99Chants label hopes start redressing with this release.

Bunita was an integral influence on her peers, most notably Morton Feldman, who was informed and aided by her compositional and theoretical ideas. He composed ‘For Bunita Marcus’, which was a rare but prominent acknowledgement for her. It was Feldman’s only piece dedicated to a woman, which tellingly sits alongside his other musical tributes – including Samuel Beckett, Franz Kline, Philip Guston, Willem, De Kooning and Frank O’Hara – some of the biggest figures in 20th-century literature, art and music.

‘Lecture For Jo Kondo’ was originally written by Bunita for Morton’s group Feldman and Soloists, who premiered it at the Almeida Festival in 1985. Marcus was supposed to conduct, but wasn’t allowed, due to male egos.

Not a lecture in the literal or recognisable sense, the piece is dedicated to the Japanese composer Jo Kondo, who was a friend and exchanger-of-ideas with Marcus. “I think it is a demonstration of the serial patterning I developed by being inspired by his Kondo's ‘Standing’ and how that just messes with your mind”, says Bunita, adding the following:

“’Lecture For Jo Kondo’ was conceived as an instrumental work. The voice part is just another instrument – an optional instrument at that. This isn’t a work where I took a text and wrote music to it. I wrote the music, heard and sensed a speaking part, but it took me a few years to get text that worked in this context. I met the Nico Vassilakis and got to love his work, so I added a speaking part using excerpts from his poem ‘Lowered and Illuminated.’

Musically and compositionally innovative, LFJK? is one of the first works to use consonance in the second half of the 20th century that was not tonal. It also introduces the idea of serialism as an aspect of neuroscience: “This is something that Jo and I had in common. This piece is based in complex theories I am calling ‘serialism’ and showing how Repetition + Mutation = Patterning. It is this patterning that is the basis of musical language and thought”, explains Marcus.
.
Taking listeners into a sound space unlike any they’ve been to before, the 20 plus minute piece is both dissonant and beautiful. The prominent broad strokes of LFJK are an alternating exchange between Bunita’s voice performance and Adapter Ensemble’s sound clusters, where a repetitive violin refrain at the fore is joined by flute, percussion and piano.
99Chants label owner and notable electronic musician David August provides a more machine-based deconstruction, changing most of the instrumentation and sound design, but maintaining the same narrative. He transports the listener through different environments, all equally connecting to Bunita’s voice, but changing the point of view. Within the release’s illuminating artwork is August’s visual score for his version, where traditional notation is replaced by a Kandinsky-esque abstract diagram.

His version comes in the following structure:

This release is the fruitful outcome of an ongoing collaboration and friendship between David and Bunita, who’re two different generations of meticulous sonic investigators, unified by a desire to deeply explore the science and heart in sound, and to expand parameters.
Inspired by Dante’s ‘Divine Comedy’ and its enlightening path, which is structured in ‘canti’, 99Chants is an independent record label that aims to purvey 99 meaningful ‘chants’ (releases), which will serve as cultural artefacts of lasting importance.

99C takes its cue from ancient and medieval poetry. Unrestricted by genre or format, each of the platform’s
instalments exists as a cultural artefact, a reflection of its zeitgeist. 99C is premised on its progressive ethos; a tangible
commitment to the environment and to representation for everyone. A finite project, it will complete on its 99th release. ... more

Bandcamp Daily  your guide to the world of Bandcamp

Featuring interviews with the mighty Hiatus Kaiyote and genre-busting L'Rain.